MH Goals has been at the cutting edge of goal post safety testing for years and as many people will know, our company MD is a recognised independent expert for the BSI.

The biggest change to goal post safety in recent years was the introduction of BSEN16579 which overhauled the old BS8462 standard. This new standard addressed a number of safety issues and has been well received by the public.

However, goal testing is an ever-evolving beast and we are always looking to improve future goal testing, and asking what else can be done to increase safety and make the tests more applicable to real world applications.

With this in mind, along with a select few European manufactures and the support of the BSI and the CEN committee (The European Committee for Standardisation), MH Goals has created a new testing method and apparatus which will form part of the next football safety standard.

The current standard uses a vertical and horizontal pull test but this doesn’t take into consideration how somebody would actually interact with the goal should they want to swing on the crossbar. We also wanted to add to this how the difference in the length of the runback can have an impact on the stability of a freestanding goal.

These issues has been discussed in the past but no conclusive testing data or apparatus had been put forward until MH Goals started investigating this back in June. A number of parameters had to be set in order to make the testing relevant and realistic, including the size of the goals, the mass (weight) to be swung off the crossbar, the angle of the swing and how the weights were too be hung. It was decided that we would test both the 24x8ft and 12x6ft goals as they are the most popular size in the UK with a range of back bar weights. The weight hung from the crossbar would range from 74- 192kg, this covered the average weight of a single child to two average adults. 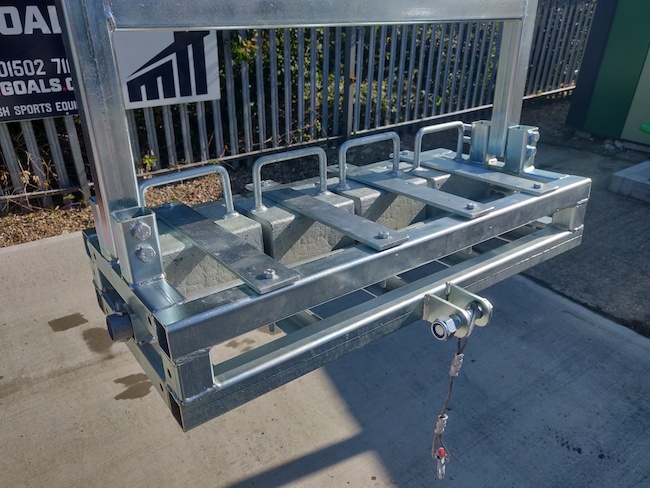 The angle of 60 degrees was chosen as it would give a large amount of initial inertia to see the effect on the goal and was deemed to be more realistic within the constraints of the goal and the human body. In order to get stable and reliable data MH Goals had to design and build a new testing rig that replicated the swinging motion of a person hanging from the crossbar. To achieve this we created a steel basket/cradle that was able to safely hold a varying amount of different masses which was attached to a remote operation release hook and our standard goal testing rig.

Overall MH Goals has now conducted hundreds of tests with varying weights across both goal sizes. This has offered a real insight into the correlation between the swing mass, weight inside the goals and the difference in stability of goals with a reduced runback length. The data gained from these tests and our previous testing in March is now being correlated with the rest of the CEN committee and will be made available in the near future. However these tests prove beyond doubt the importance of continuing to review and adapt current methods of testing in order to produce safe sports equipment now and in the future.